Welcome! You've somehow managed to stumble upon my website, which is not really that interesting or wonderful, but mainly just a random page of my fanfiction, so it can all be...somewhere, together and edited and punctuated correctly.

Sorry for not updating in...forever! But now, the Stitches homepage is up under "The Series". Go and emerge yourself in silly, shippy glee!

Back To The Place You Are

Beauty in the Breakdown

NC-17ish. Atlantis, Weir/Misc. Four ways that Elizabeth Weir never fell apart and one way she might have.... October '06.

Nominated in the Sam/Jack 2005 Fanfiction Awards for Outstanding Post-Episode.

Nominated in the Sam/Jack 2005 Fanfiction Awards for Outstanding Angst.

Nominated in the 2006 Stargate Fanfiction Awards for Best Angst Story (Gen, Other).

Nominated in the 2006 Stargate Fanfiction Awards for Best PWP Story (Other).

Laughter is the Best Medicine

PG-13. SG-1/Atlantis crossover, Major Davis/Major Lorne slash. On the eve of their separation, Paul makes a startling confession.... January '06. Also related to this are Four Messages Paul Davis Never Sent and One He did as well as X-Ray Vision.

PG-13, maybe. SG-1, S/J. Written to go in the pants!verse, a wonderful little AU created by Little Red. For a fuller explaination and more stories in this universe, go here. November '04.

PG-13, maybe. SGA, McKay/Cadman. Written for the rarepairings ficathon. Sometimes, time gets away from you. 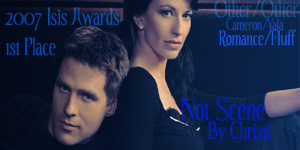 Winner in the 2007 Isis Awards for Best Romance/Fluff Story (Cam/Vala).

Nominated in the 2007 Stargate Fanfiction Awards for Cam/Vala Story.

PG-13. SG-1, S/J. "...But she knows that when she needs an excuse to cry, she still makes chocolate chip cookies." Some insight into Samantha Carter. July '06.

G. Atlantis, Gen. Elizabeth has to learn how to communicate when her normal routes fail her. December '05.

PG-13. Atlantis, Cadman/McKay with other various Cadman pairings. Cadman shares her sexual history with McKay. Surprisingly, all of her former flames have more than one thing in common... August '07.

Nominated in the Sam/Jack 2005 Fanfiction Awards for Outstanding Adult Romance.

PG. Atlantis, Gen. Written as birthday!fic for control_freak80. Those ancients really had a strange sense of humor.... July '06.

PG. Atlantis S/W. When something unexpected happens to John, it's up to Elizabeth to deal with the consequences. March '06.

Right Dress on the Wrong Girl

PG. SG-1, Daniel/Janet. During Ripple Effect, Janet has to deal with a distraught Daniel. May '06.

PG. SG-1/Atlantis crossover, Janet-centric. Written to go in the fireman!verse, an AU based on the episode "The Changeling". One night can change everything.... December '05.

The Price Is Right

There's a B-List in my Closet

G. SG-1, Gen. Nyan always knew his had a higher calling...he just had to journey all the way to Storage Closet 15C to find it. December '05.

G. SG-1 S/J. Something I wrote for the SJFic Anniversary challenge, which was basically to write a story with some kind of anniversary in it. November '04.

PG. SG-1, S/J. Just a short bit of silliness about what happens when two aliens, one drunken archeologist, a deceptively mischievious Lt. Colonel and Jack go out for a night on the town.... June '06.

Austen!verse is a fairly self-explanatory idea, a silly concept where the characters of SG-1 and Atlantis are transposed from their uber-modern, technological sci-fi setting to the quaint, country gentry life of Jane Austen's era.

Obviously, it's absurd. But it's a fun, silly kind of absurd that can be very, very addicting.

The Madness That Started It All

The livejournal post I made that spiraled into insanity. Curses to you all.

PG-13, sort of. Romance. The first story in the Austen!verse, wherein Jack and Teal'c move to Gateshire and meet Samantha Carter, the rebellious daughter of a local General. Romantic entanglements ensue, and suddenly everything's gone haywire. (Besides the obvious Jack/Sam pairing, there is also Cameron/Vala and a tiny hint of Teal'c/Janet in the depths of this story.) January '06.

Because A Maneuvering Business is so very long, I am also going to provide the link to fanfiction.net, where it can be read in parts if that is more your cup of tea. All sixteen chapters are here.

PG. Humor/Romance. The second story of Austen!verse, wherein the newleyweds Jack and Samantha O'Neill receive some unwanted guests and there are curious (and potentially scandalous) goings on within a storage cupboard. August '06.

PG. Drama/Humor. The third story of Austen!verse, wherein we finally meet John Sheppard, Elizabeth Weir, and get settled in at Atlantis Shipping and Trading Co. Traversing both the familiar landscape of Gateshire as well as the high society of London and exploring the open sea, this adventure opens the door for many others.

Because An Acceptable Arrangement is so very long, I am also going to provide the link to fanfiction.net, where it can be read in parts if that is more your cup of tea. All fourteen chapters are here. Also, a fan was wonderfully sweet and said she was inspired by my fic to draw an illustration of the last scene on the dock, found here.

Sets of Two: A Mini!Series

Nominated in the Sam/Jack 2005 Fanfiction Awards for Outstanding Series.

PG. Mini!Jack fic. "In the face of their loss, hockey tryouts and pubescent cheerleaders really didn't hold much appeal..." Jack tries to deal. Then he gets some help. October '04.

PG. Mini!Jack again. Sequel to "Duality". High school gets weirder. A lot weirder. Jack is befuddled by it all. December '04.

PG-13. Mini!Jack/Mini!Sam. When the path back is lost to you, there's no place to go but forwards. And sometimes, that can be a really great thing.... June '06.

PG. Mini!Jack/Mini!Sam, a hint of Cam/Vala. Eavesdropping can sometimes lead to more confusion than it's worth.... May '07.

Welcome to the Stitches universe, where one small, seemingly insignficant addition to canon changes...everything. An ongoing project to rewrite the series, assuming that Jack learns to knit.

Other Fandoms I Have Loved

A collection of the few fics I've written for various other fandoms. Some of it is good, some of it isn't so great, and some of it is just to make people laugh. But now, it's all here.

Not a fic at all, but rather exactly what it sounds like. Play with caution.

The Society for the Proliferation and Defense of Fluff

Fluff is a woefully under-rated section of fandom, but it offers the happiest, most giddy moments available. In honor of this, long ago, Little Red and I formed the SPDF, which honors the joy of fluff. However, because it mainly consisted of the two of us randomly cheering, "The SPDF! Yay!", it was not very effective.

As such, I later formed this livejournal community, where we attempt to provide as much fluff as possible for the masses. Come, read, and join.

Remember, only you can prevent depressed fic writers. Please send any and all feedback to Christi at daisycm83@gmail.com

Disclaimer: I do not own Stargate: SG-1 or any of its characters. Though that in itself is a tragedy.